The Advantage Of React.Js in Building Interactive User Interfaces 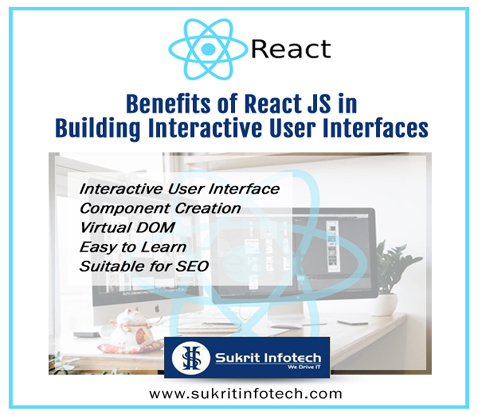 The year 2010 has brought revolutionary changes in the web development and application world with the introduction of lightweight and sophisticated JavaScript libraries. Today, there are a plethora of frameworks, giving developers the opportunity to create customized applications and websites. Among them one of the most popular choices is React.js. The Javascript has got massive popularity because it is loaded with lots of advantages. One of the best among them is the interactive user interfaces (UI). React js was introduced in 2011 by the social media giant, Facebook. It is an open source. Since its first release, it was able to garner 96,000 stars. Millions of download of the particular framework indicate its benefits.

This is the foremost quality of the open source which has attracted a number of developers. React was created especially for business websites which gives developers enough space to reuse codes and create a lightweight app

React allows users to create module-like pieces of code which are called as components. These code snippets can be used more than one time to create web pages. Thus, the reusability of codes saves time in development. The declarative nature of React js is capable to make UI designing flawless, giving developers the developers to focus on other important aspects and business logic.

It is one of the biggest achievements in the web development world. The virtual DOM stands for Document Object Model which is a virtual representation of a DOM object such as a lightweight copy. It has the same property that a real DOM object has, but it cannot be changed directly. It is known as reconciliation. The library creates a representation of the page in a virtual memory. The library performs various updates before coming with the final web-page.

We all know that importance of SEO for each website. React has come across several changes to make the web development in the Framework search engine friendly. Sites on React has an interactive user interface and are friendly to the search engines.

React has one-way data gathering which gives the excellent command to track all the changes to any segment of the data. So, it stands for clarity and simplicity.